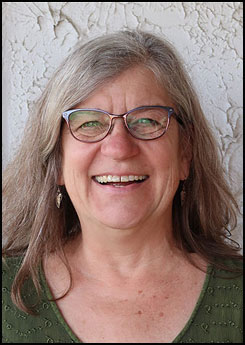 I am a Wisconsin native, born and raised in Dodge County. As a kid I lived in Burnett, an unincorporated collection of houses. When my mom said go play in the street, I did, literally! My family moved to Horicon when I was a freshman in high school. The Horicon Marsh was my backyard. I wasnt so interested in the marsh when I lived there but learned to appreciate it once I learned more about the environment.

My sister and I were the first ones in our family to attend college. I graduated with a degree in soil science from the University of Wisconsin, Madison in 1980. As part of our senior seminar, Jim Crawford talked about his LTE job at the DNR where he was assessing farm fields for their suitability for the landspreading of municipal sewerage sludge. The sludge was being used for its fertilizer value. 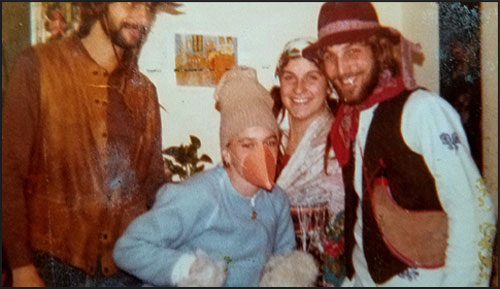 College friends getting ready for Halloween on State St.

In the Spring of 1981 Roy Lembcke hired me to replace Jim. I worked out of the Southern District office in Fitchburg. The landspreading program was relatively new. I taught the operators the qualities of a suitable site and how to use a soil survey map so they could acquire access to sites with a better chance of approval. In addition to meeting many great operators, I met a lot of good friends at the Department.

All good LTE things come to an end. I worked odd jobs until 1984 when I was called back to the Southern District as an LTE to complete Preliminary Site Assessments for the Superfund program. In addition to completing file reviews and forms, I was lucky enough to tag along with waste specialists to learn more about environmental monitoring and compliance. I really enjoyed the variety of work at the DNR, the fact you werent tied to a desk all day, and the potential for learning new things. And did I mention the people working there were great?!

Late in 1984 I was hired by the City of Platteville as a wastewater laboratory technician. While there I became a certified Grade 3 and 4 Wastewater Treatment Plant Operator. At the time I was one of only a handful of women to hold that certification. I inspired my colleagues to become certified operators, too. Or, maybe it was the pay raises tied to increased qualifications...

In 1989 I quit my job at the treatment plant. I went back to college to get hydrogeology credits with the hopes of scoring high enough on the civil service exams to try for a permanent position with DNR. In 1990 was hired to work out of the Wisconsin Rapids office as the region-wide Laboratory Certification Specialist and landspreading specialist for Wood, Juneau, Adams and Portage counties. Later I transferred to the Petroleum Environmental Clean-up Fund Act (PECFA) clean-up program in the Bureau for Remediation and Redevelopment (R&R).

In keeping with the theme of firsts for me, in 1996 I was asked if I would be willing to meet with some people so they could take pictures of a woman working in the environmental field. Apparently there still werent enough of us in the field yet. Heres what happened 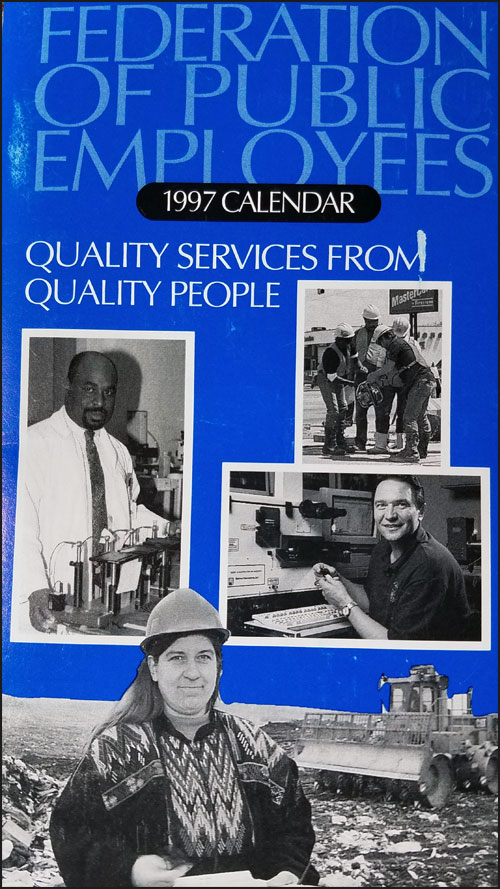 By 1992 I had transferred to the Southern District as a Waste Management Specialist serving Dane County. After several years as a waste specialist, I returned to the PECFA program working as a Hydrogeologist out of Dodgeville. I returned to the South Central Region (SCR) office when I added regional outreach duties to my hydrogeologist role. In 2009 I was promoted to SCR R&R Supervisor, a position from which I retired in 2017.

I met my husband Mike Vollrath at the Southern District. We bought our retirement home in the Baraboo Hills 25 years too soon. We really enjoyed the days we were able to work from home, especially when gasoline was $4/gallon! In our spare time we grew shiitake mushrooms and sold them at the Dane County Farmers Market for 9 years between 2004 and 2013. 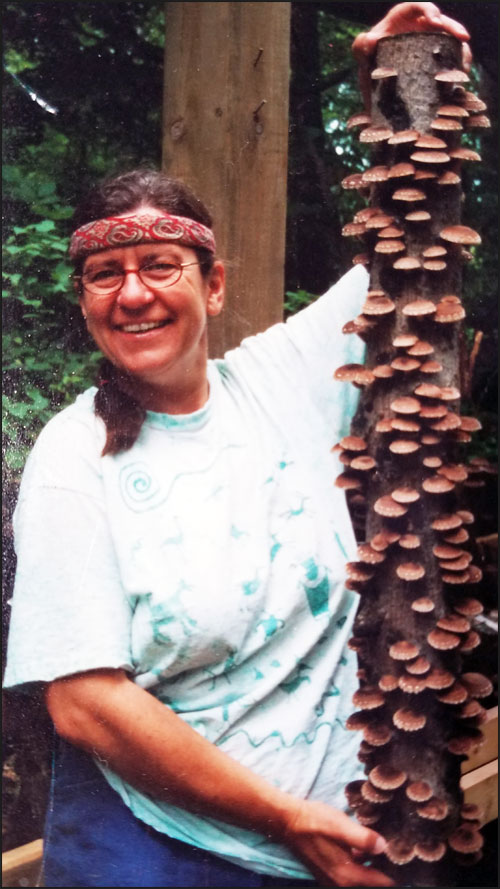 In our spare time we grew shiitake mushrooms and sold them at the Dane County Farmers Market for 9 years between 2004 and 2013.

Mike taught me to hunt and fish and we now spend part of our summer fishing Benoit Lake where we have a camper in a privately-owned campground outside of Spooner. 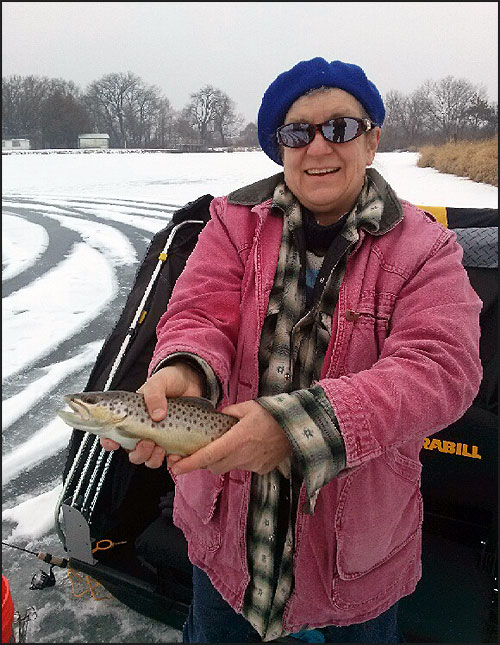 Im able to devote more time to my hobbies of gardening, sewing and other crafting projects, too. We joined The Madison Packer Backers Club and are able to participate in many events they plan, and we attend a Packer game every now and again. In 2017 the club was selected to hold the flag on the field before the home opener against Seattle. 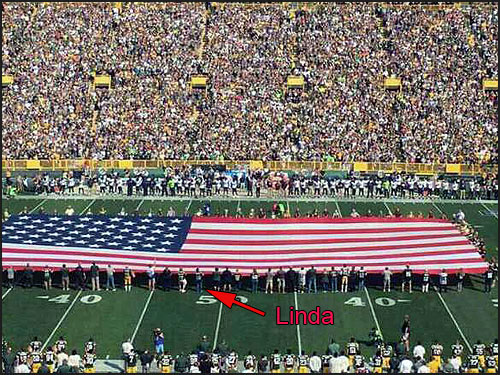 Mike and I sailed a 13-day river cruise from Budapest to Amsterdam as our retirement gift to each other. In 2019 we spent about 3 weeks traveling in the Amazon, visiting Machu Picchu and the enchanted valley, and sailing the Galapagos Islands. 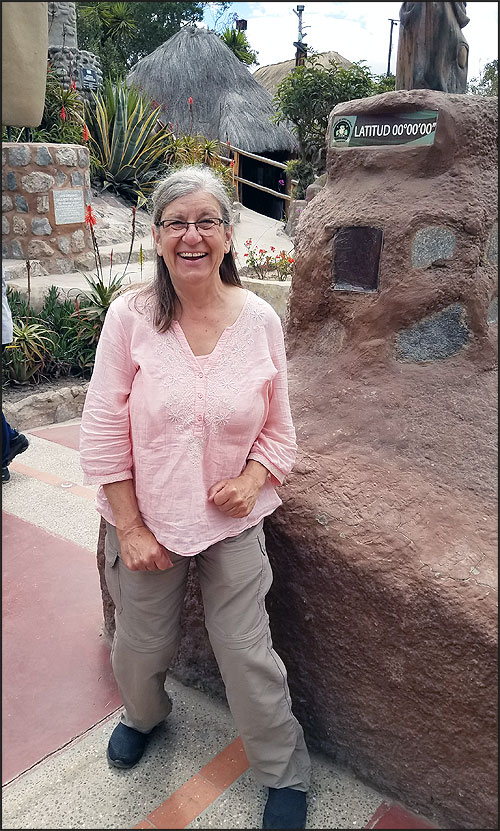 In two hemispheres at the equator museum Ecuador
2019 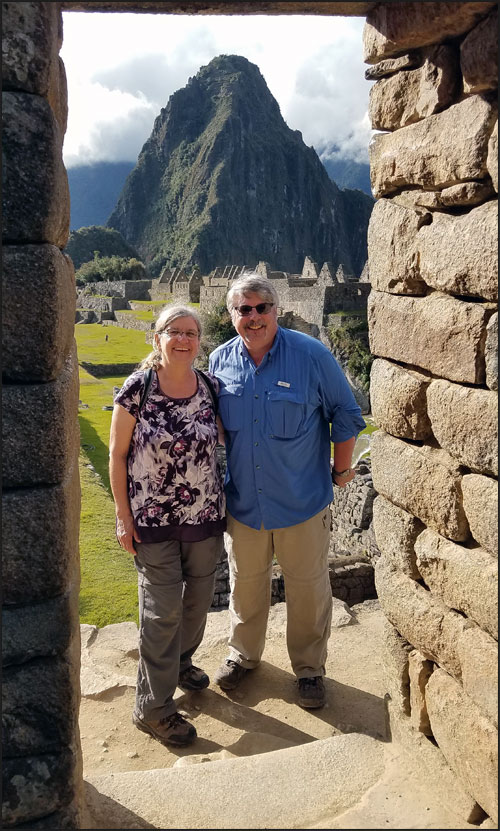 Lately, COVID-19 kept us closer to home but we are looking forward to more travels in the future. We didnt start out thinking of traveling all seven continents but now believe it could be within reach.