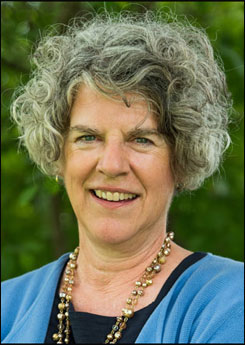 Mary Jean grew up in central Iowa. She was the youngest of four kids, and the only girl, which was a good position in life! Her dad was a WW II vet originally from southern Iowa. Ralph worked in safety and labor relations for the Maytag Company, but his real love was woodworking and dabbling in art. Her mom Ruth was a strong individual, driven by family, career, and just causes. She was the dietitian at the local hospital.

Ruth was from Wisconsin, and Mary Jeans childhood was sprinkled with wonderful trips to Watertown, Fond du Lac, Weyauwega, and Rhinelander. 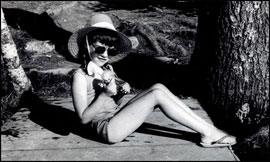 I'm ready for my close up,
Mr Demille!!

Exposure to the Horicon Marsh, Lake Superior, the northwoods, and the Kettle Moraine made lasting impressions.

When she was 7 years old, her parents built a home on 5 acres outside of Newton, Iowa. Her family loved the area, especially French's Woods, the oak woodland across the road. 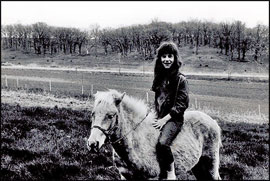 Riding Smokey with French's Woods
in the background.

One day the news flew through her family: someone is building a house in French's Woods! How dare anyone do that?! This was when MJ realized that to protect land from development, the best way may be to buy it. And that concept was fundamental to her career in conservation. 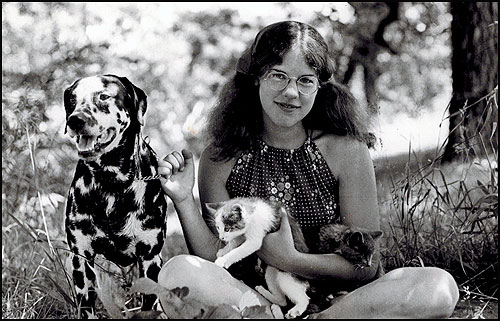 Four years at nearby Grinnell College resulted in a solid liberal arts background and a bachelor's degree in biology. She also gained varied work experiences. During high school and college she worked as a field technician with the Soil Conservation Service. Through an internship with the Iowa Department of Natural Resources wildlife program she helped with research on the impact of lead shot. She greeted duck hunters as they left the field, and politely asked if she could collect the gizzard and a wing from their kills. It was quite the experience for a previously squeamish kid from a non-hunting family who had never really handled a knife!

After college, Mary Jean was fortunate to work with Dean Roosa, state ecologist with the Iowa Department of Natural Resources, in a short term position. In the spring of 1981, Dean introduced her to staff of The Nature Conservancy (TNC) who were visiting from Arlington, VA. They were looking for an intern to assemble information on rare species and natural communities as well as potential nature preserves in Iowa. Her work as the Preserve Selection and Design intern was the basis for the new Iowa Chapter of The Nature Conservancys land protection program.

Her next opportunity was with the Natural Areas Inventory at the Iowa DNR. TNC was launching biological inventory programs across the country in partnership with state agencies. The goal was to bring a systematic, science-based approach to natural areas conservation. As data manager, she worked with a team of scientists to document and map occurrences of Iowas rare species and natural communities. Like other Heritage Programs, the Iowa team built a data base used for conservation planning and environmental review.

In 1983 The Nature Conservancy began to use Heritage data at a regional level for planning purposes. At the time, conservation planning was conducted state by state. With a regional approach you could look at a species across its entire range. Mary Jean was hired as the Midwest Regional Information Manager and moved from Iowa to Minneapolis.

After two years, MJ knew her heart was not in data management, and she began applying for other positions. She was hired by TNC in Kentucky to manage 6 nature preserves, and seek voluntary conservation agreements with property owners. Her land management work was varied and often surprising. A property TNC purchased in eastern Kentucky came with a squatter family. One day the family got mad at TNC and moved away, leaving behind a mess. A coal company exec offered to help TNC by removing the junk. When the project was complete, Mary Jean thanked the exec and asked about the project, including where they took the trash from the site. He advised her not to worry about that.

The landowner contact work introduced her to a real cast of characters, from retired nuns to a Johnny Cash impersonator. Voluntary agreements soon led to opportunities to acquire land, and Mary Jean began to dip her toe into real estate. Her favorite project was Mantle Rock, a beautiful and historic property on the Cherokee Trail of Tears. It was donated to TNC by the Reynolds Aluminum Company.

While not necessarily looking for a job, she heard from friends in Wisconsin that there was an opening for Director of Land Protection at TNC. She got the job (Jim Huntoon represented the WI DNR on her interview panel!) and in March 1988 she moved to Madison. This began a long run with the Wisconsin Chapter of TNC. She held the position from 1988 to 1993 doing land acquisition statewide, working closely with WI DNR real estate and endangered resources staff. 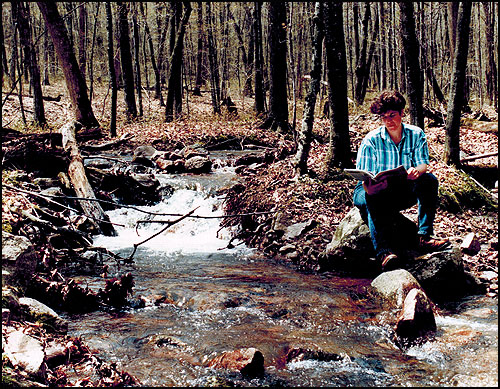 TNCs work evolved to conserve larger landscapes. The Baraboo Hills were selected as Wisconsin TNC's first landscape project, and Mary Jean was promoted to project director. The Conservancy was fortunate to receive generous donations from Baraboo area residents for conservation in the Hills. Because of this stable funding base, TNC was able to lead in science, hire staff, build partnerships, and acquire land.

It was a time of increased collaboration. In 1992 both TNC and DNR applied independently for funding from the US Forest Service to create an additional forestry position for the Baraboo Hills. The grant committee asked TNC and DNR to work together. This changed Mary Jean's life-- the fellow she needed to work with at DNR became her husband 7 years later. Together, Mary Jean and Rick Wojciak hired and managed the Baraboo Hills Forest Ecologist. 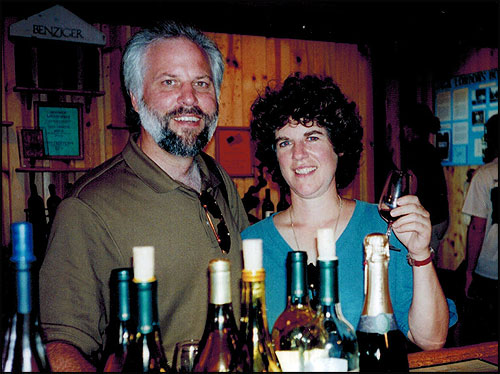 Mary Jean was hired as Wisconsin State Director for The Nature Conservancy in March 1999. She married Rick Wojciak the next month! Aside from being married to Rick, highlights during her 20 years as state director include: working with the Wisconsin Board of Trustees to develop a strong and effective group of volunteer leaders to help TNC achieve its mission in Wisconsin; collaborating with DNR to conserve over 83,000 acres of forested habitat in northern Wisconsin using working forest conservation easements; playing a leadership role in 3 major Wisconsin fundraising campaigns, the most recent of which raised over $75 million for conservation priorities; and working with the talented employees of The Nature Conservancy. 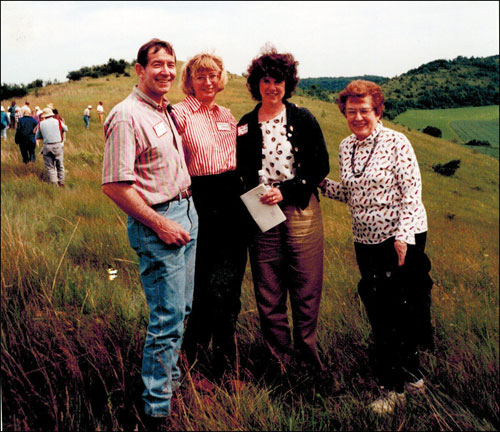 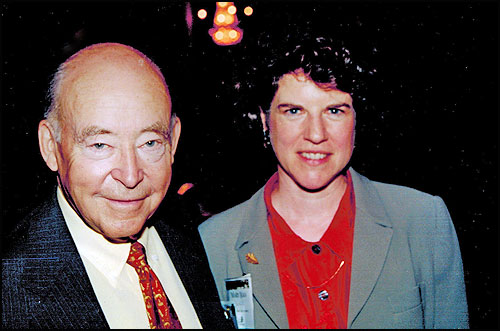 Mary Jean retired from TNC in November 2019. One month later, she and Rick headed to Thailand for a month of bicycling across the country. They returned to Wisconsin, and shortly after, the pandemic arrived in full force. As a retiree, Mary Jean savors every day. She and Rick enjoy biking, cooking, and playing with their puppy Rudy the smooth collie. Based on lots of advice, she has been careful about her time and does not have too many long term commitments yet. She and Rick look forward to traveling more. In addition to Thailand, MJ and Rick have bicycled in Croatia, France, Italy, Spain, Portugal, Hungary, Austria, Poland, and the Czech Republic. They have also traveled to Costa Rica, Cuba, China and Indonesia, often with The Nature Conservancy. So travel is definitely in the future once it is safer to do so! 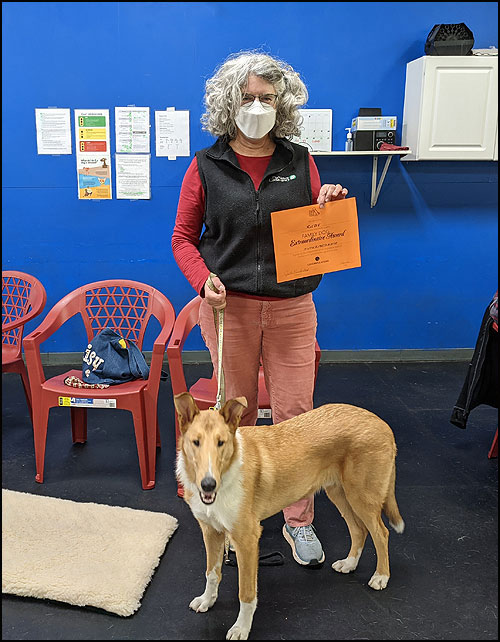 Rudy graduates at the top of his class, with honors, from Obedience I. 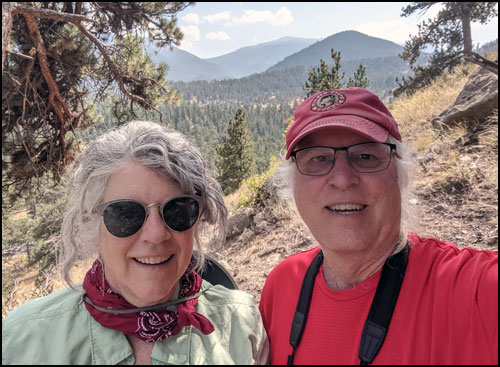