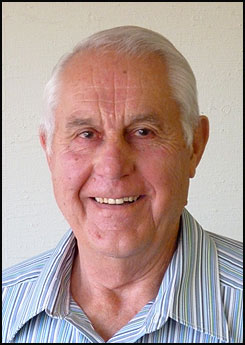 Ed Frank was born, at home, on a dairy farm near Cedarburg, WI on January 16, 1933. He graduated from Pleasant Knoll School, a one room country grade school nearby, where all eight grades were taught by one teacher. For eight grades, he had only two different teachers (who were sisters). He then attended Cedarburg High School (CHS), where he graduated, with honors, on June 2, 1950, among a class of 64 students. Ed was CHS Student Council President for two years, Junior Prom King, and a chorus member for four years. He was a varsity letter winner on CHS championship football and basketball teams and earned 3 varsity letters in baseball. He became an Inaugural Inductee into The CHS Athletic Hall of Fame on Feb. 19, 2011.

In 1954 he tried to follow Lyle Blackbourn to Green Bay. He was signed by The Green Bay Packers but was released at the end of the exhibition season.

He never served in the Military. He was deferred as an undergraduate. He had his physical and received his notice to report, in June, 1954 when President Eisenhower changed Draft Classification Priorities, causing the Local Draft Board to rescind the order to report.

Ed joined the old WCD in 1958 as a Conservation Aid. After working for two years for John Gates , on his Pheasant Research Project , he became a game manager at Elkhorn ,where he served under Paul Kennedy - Area Game Manager for Walworth & Jefferson Counties. Two years later he transferred to Wildlife Research as the project leader for Experimental Upland Game Habitat Management research at the Waterloo Wildlife Area in Jefferson and Dodge Counties. A paper entitled, Production of Nesting and Winter cover for Pheasants in Wisconsin, was published, based on this research, in the Journal of Wildlife Management, 33:802-810, in October, 1969. It was one of the first times warm season grasses had been planted to provide residual nesting cover for pheasants. 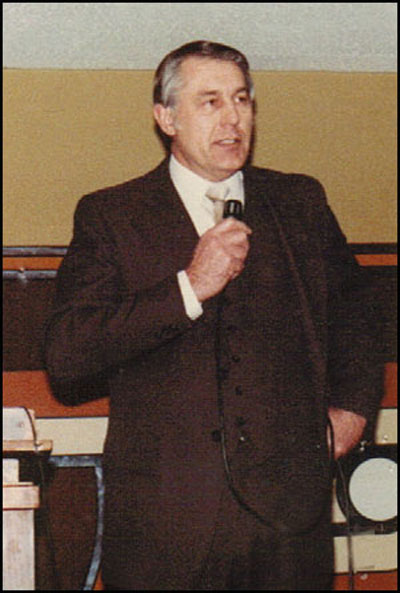 He transferred to the Bureau of Wildlife Management Staff in 1969. He was the first to occupy the newly created position of Farm Game Staff Specialist. He ultimately became responsible for staff work on all small game. He also served on a variety of Inter-agency Committees, including Federal ASCS and SCS Program Committees and a Public Law 566 committee (USDA sought to channel steams and drain wetlands as part of broader Watershed Projects, which used controversial Recreation Benefits to justify cost /benefits ). Probably the most rewarding activity, during this period, was working with and through the Midwest Pheasant Council and the Wildlife Management Institute to obtain Wildlife Benefits from long-term USDA Agricultural Land Retirement Programs, similar to the current CRP.

In 1977, Ed was assigned to the Bureau of Planning to work on developing and implementing "Comprehensive Wildlife Planning"- An effort to employ the "Management by Objective" method of pursuing the States wildlife management goals being pushed by the US Fish& Wildlife Service, at the time. While doing this, he continued to carry out most of his upland game staff duties.

Ed returned to full time Bureau of Wildlife staff work in 1983,under the new title of Upland Wildlife Ecologist.He advocated hunting STOCKED hen pheasants, along with roosters, on the Bong Recreation Area and on large heavily hunted Wildlife Areas that had low, or no wild pheasant populations. He advocated closing heavily hunted large wildlife areas at 2:00 PM to facilitate stocking for the next day. He coordinated the modernization of the pheasant rearing facilities at the Poynette State Game Farm. He advocated infusing Pennsylvania and Iowa wild pheasant stock into parts of Wisconsin that appeared to have suitable habitat, but few or no pheasants.

He coordinated Project Respect (A Program to facilitate obtaining access, for hunting, from cooperating private landowners). He was designated to be the Wildlife Staff liaison to the Bureau of Engineering for development projects on State Wildlife Areas.

Ed was one of the leading role players in the re-introduction of the Wild Turkey to Wisconsin. After the first few years, he was also responsible for coordinating The Wild Turkey Hunter Education Program in Wisconsin and administering the Turkey Hunting Permit System, together with the License Section and Data Processing.

He developed the Natural Resources Board Wildltfe Policy, which is still Appendix M in the Wisconsin Administrative Code.

Ed retired in January, 1991, but remained very active as a Wildlife Biologist. In 2007 he received The Wisconsin Award from The WI Chapter of The Wildlife Society-"In Recognition of Exceptional Contribution to the Conservation of Wisconsin's Wildlife Resources". He is a past President and a current Board Member of The Wisconsin Sharp-tailed Grouse Society. He was an active member of the national Wild Turkey Federation for a number of years post-retirement,but drifted away a few years ago,when the State Chapter became very political.

From the time he retired in 1991, until 2013, Ed was an active participant on almost all of the DNR's Upland Game Bird Technical Committees. He considered his role to be to offer historical perspective and knowledge. In 2013, the role of DNR retirees on these committees was severely curtailed by DNR Secretary Cathy Stepp. He now participates only by invitation from the Committee Chair.

Soon after retiring, Ed joined the Association of Retired Conservationists (ARC), also known as the " Ex-Cons." He initially served as an alternate to Tom Rausch who was The DNR Retiree Representative (And a Charter Member) of The Wisconsin Coalition of Annuitants (WCOA). WCOA consists of 20 statewide and regional organizations representing public employee retirees in the Wisconsin Retirement System(WRS). WCOA's goals are to provide a forum for member organizations to share information, discuss and actively pursue issues and problems affecting WRS retirees, and protect the fiscal and administrative integrity of the Wiscosin Retirement System.

Ed married his wife, Deane, on Jan. 30, 1954 and they have two daughters, Marie and Peggy. Ed and Deane recently celebrated their 60th Wedding Anniversary in Hawaii, with the entire family, which also included two son-in-laws and two granddaughters. Had a great time!

Just before they retired,The Frank's purchased a lake cottage on Deer Lake, Northwest of Spooner, which they frequently visit for 3-7 day "Vacations" from their primary residence on Madison's East Side, where they have lived for the past 45 years. 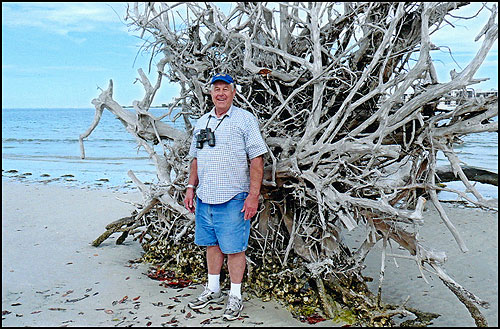 They often spend about a month near Bonita Springs, Florida partying with other Retirees in Feb. or March. In the past they have spent a week or more in Florida, Alaska, Hawaii, Minnesota, Michigan, New Mexico, California, Arizona, Washington, Nevada and New Hampshire. 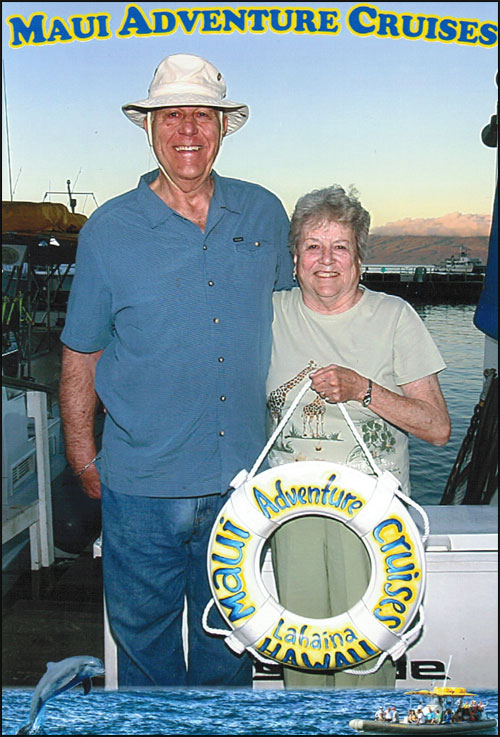 They can't think of any state they haven't traveled through in the US at some time or other.

A 3 week wildlife photo safari in southeast Africa in 2007 was the zenith of their foreign travel. Various excursions into Canada and Mexico were very enjoyable,as were cruises to Alaska, The Sea of Cortez, the Bahamas and the Gulf of Mexico.