I retired in August 2016 after a 35 year career at the DNR where I enjoyed working as a scientist with the goal of improving and protecting Wisconsins environment. Over the years, I learned a lot from supervisors and colleagues and, with their help, accomplished many good things for Wisconsins environment and citizens.

I became interested in environmental sciences early on while growing up in the 1960s and 70s in Stevens Point and Shawano. After obtaining my BS in Environmental Sciences/Public Administration from UWGB and working on a study of Green Bays water quality, DNR hired me as a water resources management specialist (project) for the water quality program in Madison. I was coordinator for the Phosphorus and High Flow study and helped with stream studies and phosphorus detergent ban efforts. Our group was able to reduce the amount of phosphorus discharged to Wisconsins surface waters by expanding the P detergent ban and setting wastewater treatment limits.


A few years later, the Air Management program hired me into my first permanent position as a tracker of enforcement actions. But water called me back in 1984 when I took a position as an environmental scientist and later an environmental toxicologist. There I was part of a team that developed and promulgated rules for surface water quality standards for toxic substances, removal of phosphorus from effluents; and disinfection of treated domestic wastewater. These projects came to fruition due to long and dedicated work by many DNR staff from different programs and were great accomplishments for Wisconsin. For my part, I completed a lot of paper work necessary for rule promulgation but also chaired, co-chaired and staffed three different advisory committees comprised of representatives from industry, municipalities, environmental groups, and other interested groups.

Looking to expand my career, I completed my MS in Environmental Toxicology from UW Madison while working part-time at DNR. My research involved immune function assays for wildlife. Then the stars aligned and I quit the DNR in 1989 to take a year off with my partner to sail on SV Pelagic in the SW Pacific. We started in New Zealand and completed a route that went to the south end of New Zealand, north to New Caledonia, Vanuatu, the Solomon Islands, Papua New Guinea, the Great Barrier Reef/Cairns Australia, and back to New Zealand. 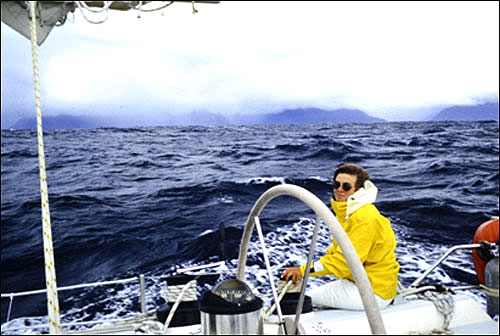 After a year and 14,000 miles of sailing, I was lucky to be hired again by the DNRs water quality program in late 1990.

In 1992 a promotional opportunity came and I became Fisheries Managements Great Lakes Community Specialist and Toxicologist. In this position, I was able to get in the field again and conducted several studies of the effects of pollutants and contaminants on fish until GPR funds dwindled. In 2001, I switched to become the statewide coordinator of fish contaminant monitoring and consumption advisories working with fish and water biologists, health experts, and other states, tribes and federal agencies. In this job, I was part of several projects that lead to documentation of temporal trends of PCB and mercury in fish, testing fish for new substances like perfluorinated chemicals, polybrominated diphenyl ethers, and even health-promoting omega fatty acids. Working with others, we created an online FIND ADVICE query tool that allows people to find eating advice for fish from their favorite fishing spot. 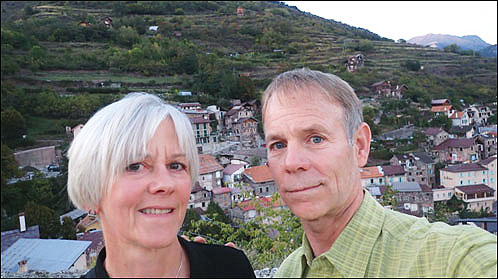 During retirement, I plan on doing more of what I enjoy including bicycling, softball, volleyball, any type of watersport, traveling the world, hiking, cooking, gardening, birding, and hanging out with my family and our dog. I plan to work on my French and get back to more creative endeavors like drawing. But first, I have a list of house tasks which will be somewhat fun now that I dont need go to work! 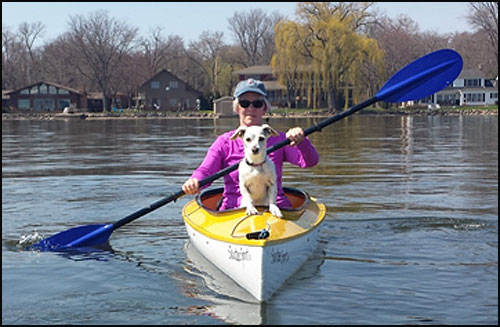 Kayaking on Lake Mendota
with Chaka