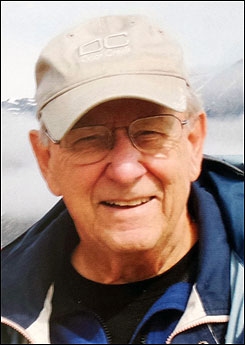 As with so many Madison area folks, I was a product of another initial settlement, in my case Milwaukee. I was born in 1935 in the midst of the great depression. In addition to my given name, I was often referred to as that little dickens, or the trouble maker, or the brat, or just Blondie. I earned these names, perhaps, because of a few childhood deeds I was involved in, such as starting the great United Rail and Transfer Storage Company fire, and repeatedly throwing snowballs into the open windows of Messmer High School, an activity which flustered the teaching nuns.

I also did commendable things such as entering my wooden racer in the Milwaukee Soap Box Derby, and for a period of four years entertaining Milwaukee Childrens library classes with my magic performances.

I attended Rufus King High School, engaging in basketball, track, and working parttime in numerous jobs. I was please to sign the School honor roll.

I joined the Coast Guard Reserves and upon graduation enrolled at U.W. Milwaukee. After completing my active duty Coast Guard service, I worked as a printer, alarm dispatcher for the Wauwatosa Fire Department and once found myself running unsuccessfully for the position of Milwaukee Alderman.

I then enrolled at the National College of Chiropractic. Upon completion there, I was engaged as a self-employed chiropractor for four years.

For a variety of reasons, I refocused my career and moved to Madison, signing on with the Department of Administration as a Personnel specialist. In that capacity, I led a team evaluating the classifications of all the DNR positions. That ultimately led to an unlikely appointment with the Department of Justice. After nine years there, I accepted a position as Deputy Secretary of the Department of Industry, Labor and Human Relations. One of functions of that Department was to oversee federally funded Conservation Works Projects through a Board which I sat on. Our role was to provide small grants for youth organizations.

In 1982, I was appointed as a Personal Consultant to the DNR to advise the Secretary and oversee changes in the DNR personnel management system. Three years later, I was appointed to the DNRs office of Planning and Analysis, and in 1992 I was appointed to the position of DNR Deputy Secretary. I retired from State Government in 1995 after 34 years of active service having earned three degrees, the last being a Masters in Public Policy and Administration from U.W. Madison. My work was fulfilling. I am proud to be one of the founders of the Natural Resources Foundation, I helped In the creation of the Horicon Marsh Interpretive Center, the Sandhill Outdoor Skills Center, the Managing for the Future training program and many other activities.

Throughout my career, I enjoyed the support of my teammates, my wives and children who always gave me balance in the work I did.