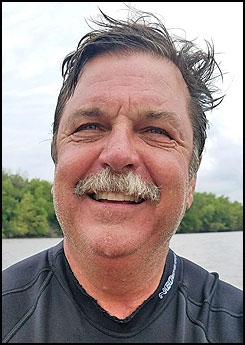 It's an odd circumstance that I was born a Libra in October 1956. Libras, identified by the scales, are the zodiac sign of balance. That I am not. If you know me, I am arguably the most imbalanced of people within the Department and / or life in general. No, Id been a better fit for Aquarius- born of, and to the water. For it is to the water that I have been eternally drawn, feel connected to, and at peace within.

For logistics, nuts and bolts, Ill offer this. Im a Madison native. I grew up on the far west side when the expanding burbs were actually town of Madison. Crestwood neighborhood was my home turf. West of us, where the malls and sprawl now punctuate the land, were farms, woods, and feral land in the sights of an expanding middle class with dreams of their first home. I was a public schools kid, graduating a proud James Madison Memorial Spartan, class of 1974. 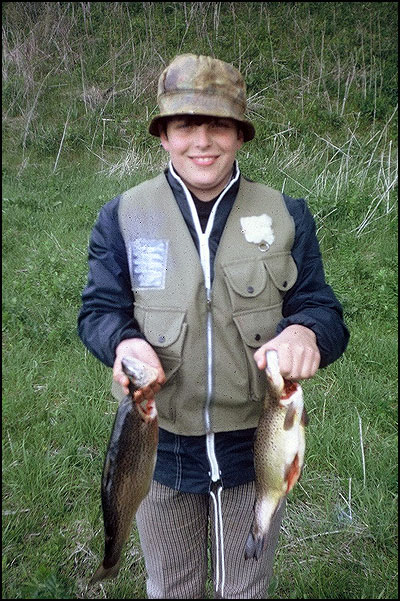 About age 12
Already got the trout bug! 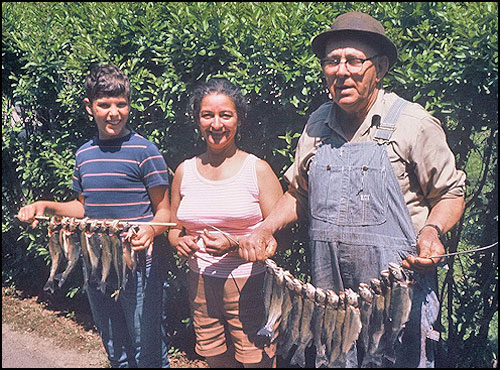 Me, Mom and my Grandpa

I grew up in a family with a hunting and fishing tradition. My father owned guns and my grandpa had a boat and motor. Fridays would find us packed up and heading to the trout streams of Grant county. We marked time by the onset of sprouting of roadside asparagus and deer season. My folks had a large garden and canning, butchering, and home preparation of everything from the first peas to late summer sauerkraut was the norm. I grew up looking at Herters catalogs and learning how to clean a shotgun. I attended the Youth Conservation camps and could generally be found on the shores of Lake Mendota rather than on a ball diamond.

At the encouragement of my parents, I wrote an essay that captured me a $550 scholarship from the Yahara Fishing Club in 1974. That paid for my first semester at UWSP where I studied fisheries management. Those formative years were magic. The privilege of studying under the guidance and kind hands of Dr. George Becker, Dr. Robert Englehardt, and Dean Dan Trainer sold me on natural resources. My adviser, Dr. John (Jack) Heaton got me my first DNR job - an internship with Don Fago in the Bureau of Research. We conducted the study of the distribution of Wisconsin fishes. First time since 1939. Jackpot! Young men, paid to ram around and shock, net, and catch fish all over Wisconsin. Precious.

After graduation in 1978, I was a garbageman in Stevens Point. That was an education in and of itself. I learned you gotta go. Follow the jobs. Dr. Heaton vouched for my abilities, and in spring 1980 I found my self in Vernal Utah, working on the endangered fishes of the Colorado river and tributaries. For 3 years I was paid to whitewater raft the big rivers of the wild American west- the lands and waterways of John Wesley Powell. And with coed crews? Lottery winner, again! 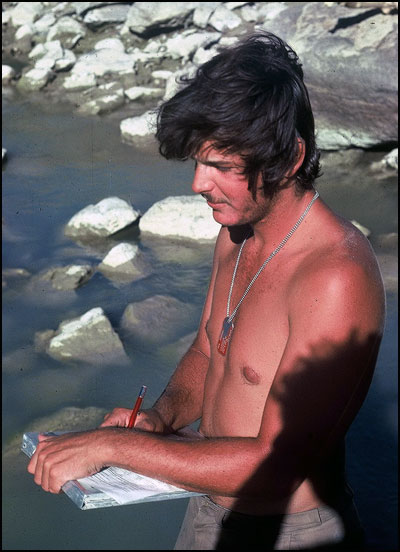 Fish Tech on the Colorado River
1980

It was here I learned field surgery and radio telemetry, a niche that I was able to lever when it was time to move on. In spring 83 I moved north by northwest, to Umatilla Oregon. There, I spent 2 years on the Columbia system tracking walleyes and a fish called the Oregon Pike minnow. Sandwiched between the Hanford Nuclear Reservation on the Washington side and the Umatilla Chemical Weaponries Depot on the Oregon side, I decided to get the hell out of there in 1984 and return home.

I remember crossing the Mississippi in Dubuque in October of 1984. I was thinking I could die happy now. I had made it home to my Ouisconsin- where the waters meet. I hustled myself up to Dykesville to take Susanne as my sweet wife (now of 36 years) that fall. We lived on the bay of Green Bay and I was able to hook a LTE fish job out of Sturgeon Bay. Loved it. Hated it. I am no sailor when it comes to the BIG water. While whitefish and lake trout have, and always will intrigue me, my desire was to work on rivers.

I got my nod to a permanent position in April 1986 when I interviewed (again) with Fish Research in Fitchburg. I was hired by Lyle Christianson and worked with Don Fago on catfish, gravel chubs, and getting the Distribution Study proofed, printed and put to bed. This was the precusor to today's fisheries management database but no one knew it. Don was a visionary who understood computers and data WAY before anyone else.

In 1988, I got a call from central office, the Bureau. A fish tech 2 was equivalent to a fisheries manager 1 and 3 vacancies were being interviewed for. Would I want to sit in the hot seat ? I did, nervously, before Ron Poff and Doug Radtke. After 1 hr, Poff asked if Id go to Prairie du Chien to take Pam Thiels position working for Willy Fernholz. I didn't know Pam, or Willy, or shi__ about the Mississippi but I knew I wanted it, and in August 1988, Susy and I went west. That began the Fisheries Management road. I am forever thankful Lee Kernen gave me a nod and a chance. Western Wisconsin needed a presence and a manager who could weather the harshness of commercial fishermen, small town suspicion of the DNR, and the relative remoteness of being about as far away from Madison as possible. I drew the Ace.

The river was a gift. I had 80,000 acres to learn from, to appreciate, and to fall in love with. Prairie was a river town and had its fair share of catfish fishermen. However, it was clams- freshwater shellfish, that was the job. Remember Barbara Bush and her big-ass pearl necklaces ? Well, the raw materials for most of the worlds cultured peals came from the Mississippi river, in, and around Prairie. I was dropped into a world similar to some odd iteration of the black market, drug smuggling, and organized crime. All for $9.15 /hr. Clams were a cash commodity and the men and women who were engaged in the business were not doctors, lawyers or Indian chiefs. This was a below the radar enterprise where deals were sealed in hard cash, liquor, and sometimes blood.

DNR was way out its league with this clientele. However, long story short, we mustered the will and resolve to end the pillage and plunder and ultimately close the fishery. Biology trumped economics. As a young resource manager, I was fully supported by my program, the administration, and the Board. Doing what is right is never easy, but its always right.

Besides involvement with numerous river efforts, my greatest joy was in the recovery efforts of endangered mussels. We established a protocol and multi state partnership to raise shellfish and help restore populations of mussels impacted by the newly arrived zebra mussel. I am extremely proud to have been central to the hard work that has made a significant contribution to the science, the mindset of recovery, and the freshwater mollusk resource. 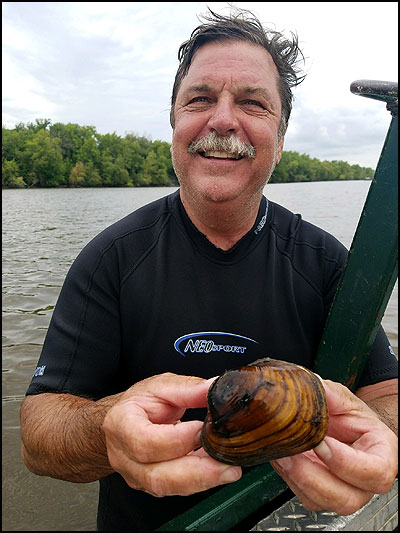 Queen of the Unionids, the Higgins Eye Pearly Mussel

In 2000, my phone rang and I was asked by Ken Johnson in SCR if I'd consider taking the Dane county Fish manager job. It was a blessing and a curse. My family and roots were Madison centered. My kids (Augusta and Sampson, 11 and 9 at that time ) 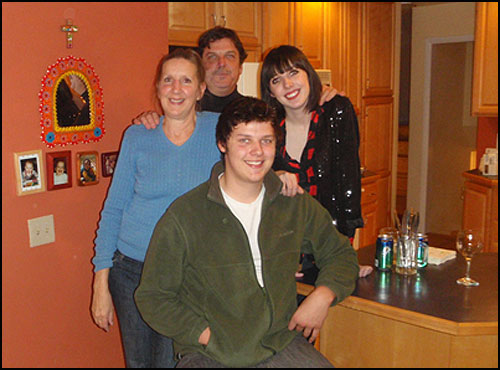 were at the point if we were ever gonna move, it was now. I was ready for new responsibilities. And a big mortgage!

Beginning in August 2000, I assumed the fish management responsibilities for the infamous Madison lakes, iconic Black Earth creek, and a heap of public and partner tasks , duties, and opportunities that you didnt get in a county of 14,000. Suddenly, 550,000 people had my phone number. Busy? You bet. I could fill every day, and night with meetings, talks, club functions and pressing the flesh. The job demanded a presence. I was happy to fill it. To return to my home ground. To have sense of place resonated with me. Tip ONeill once said all politics were local. Same goes for fish management. It starts where you live. I loved Madison and the busiest duty station in the program. 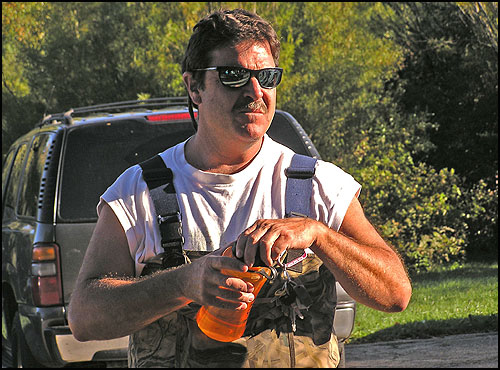 A Day on the Job
Italian Riviera Sports Shirt! 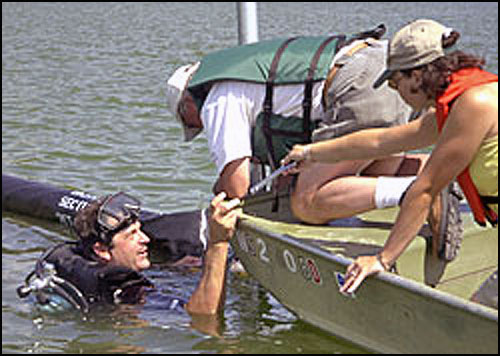 Most of all I loved the people. At that time, I was held far from re-org and I was free to do what I needed. We were in the basin alignment system of line structure then. Best of all, my duties meant I needed interaction with real estate, endangered resources, solid and animal waste, watershed, LE, engineers, and everything in between. This was when we were at our best, our zenith. To interact daily with people of passion, intelligence, integrity was a gift. A lowly fish manager talked freely and candidly with Bureau directors, Division administrators, and the Secretary. We moved mountains. We made a difference. We served and we upheld our obligation to the resource, the public trust, and the future. To be able to mentor young professionals into an honorable profession was a delight and a chance to always be better. I kid you not. We were the standard by which all else was measured. Best fish program in US? Look no further than right here. We worked hard at excellence and we were the flag bearer for how fisheries was done. I stand humble and proud. I didn't sit on fences. We put ourselves out there and made a difference. No one said you couldnt.

I did have some stellar stupidity too. Bad things happen to good people. In an innocent attempt to help a buddy with bait for a musky fishing trip, I became the Minnow Bomber. A cooler of bait became an object of suspicion and eventual police intervention, as in bomb squad. Yeah. Uh Huh. Can you say evacuation? How about morning commuter traffic reroute? Oh, and NPR and AP wire service news? I got conduct counseling for that.

I prided myself on speaking truth to power, however clumsily and incorrect. I got reprimanded umpteen times but my bosses always stood up for me and the reasons I was acting under.

I walked out after 30 +years on Friday the 13th May , 2016. We all know when it's our time. My body, aged then at 59½, couldn't do the heavy cold wet work of spring and fall without consequence. There were good folks whose time had come. It was OK to let go.

In retirement, I built a shanty boat  a floating houseboat kinda thing that we enjoy the river on. 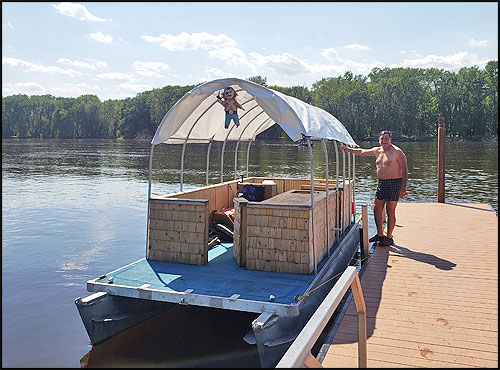 Shanty boat, aka NO REGRETS 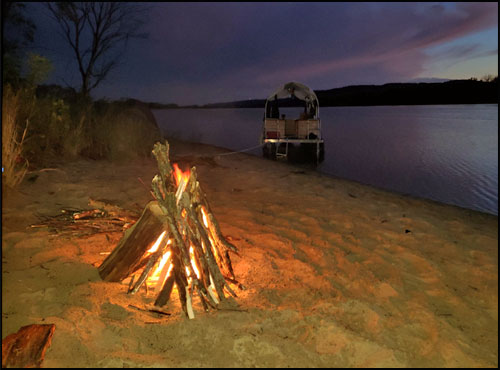 I spend a lot of time at family cabins we have in Crawford and Vilas counties. I see friends  a lot. I fish. I bike. I write. I am an alpha male dog to two female terriers. I watch Jeopardy and travel. I spend time with my kids and just keep moving.

DNR was a worthy venture. I was given the best job a man could ask for. I made friends, I made a contribution, and now, I have made peace in my mind. It all comes full circle.

Our doubts are traitors - and make us lose the good we oft might win, by fearing to attempt." -William Shakespeare